Our family travels down to southern Texas several times a year.  We have visited Sea World San Antonio during each season of the year.  The amusement park is a family favorite with each family member having a season they adore.  Let’s take a closer look into each of the four seasons of the year at Sea World, San Antonio.

This post was originally written as the Three Seasons of Sea World on MommaDJane.com – updated 2013

What I love most about Spring is the weather. It’s not too cold, yet not too hot.  When the weather is nice, the Sea World crew walk around showing their animals and sharing fun facts to teach the kids.  Everyone has the chance to take photos and pet each of the animals.

In March is when Sea World’s water park, Aquatica, opens for the year.  You can spend the entire day at the water park, however depending on the fluctuating temperatures during the Spring season in Texas, the water may still be pretty cool.  During the Spring we usually spend more time feeding the dolphins, watching all our favorite shows and, of course, visiting the shark and stingray tank before we head home.

If crowds aren’t really your thing then I recommend checking to see which week is the common Spring Break for public schools around San Antonio and if at all possible go the next week after most of the vacationers have gone home. Of course if you are like us and you must travel a long distance to visit Sea World, then Spring Break from school may be your only option.  In this case I recommend going on a week day. We’ve had great luck with the crowds and always plan to spend the full day at the theme park, taking our time to see everything.

During the summer in Texas it is hot!  Because of the higher temperatures we often make a trip down to Sea World just to visit Aquatica.  One of the must-do attractions at Aquatica is the Sting-Ray experience.  You are able to get into the water with the Sting-rays and feed them.  It’s pretty cool, plus you receive a professional photo.

Another must-do in Aquatica is the Sting-Ray Falls water-slide which is suitable for kids 36″ and taller.  Sting-Ray Falls is not a thrill ride by any means.  You ride in a four-seat raft that goes around turns, ultimately leading you inside a tunnel under the water where you can see the sting-rays swimming around you.

Sea World has done a great job of making sure there are plenty of indoor restaurants and cooling stations to help give their guests a break from the heat. If you plan to visit the water park then I recommend purchasing the two-day pass so you don’t feel rushed. We really enjoy spending ample amount of time in both areas.

Kids also love playing in the Sesame Street Bay of Play area during the summer.  It is just hot enough that they won’t mind being wet while walking around the park.  The cool water is actually refreshing for them and the play area is a blast to climb on.  Plus, there are characters and shows right around every corner.

Sea World hosts their Howl-o-Scream from the end of September to the end of October.  The Halloween style festivities are beyond elaborate.  Hands down fall is my favorite season at Sea World, my teen’s too!

During the day you can take the family of all ages around the park to capture photos sitting on top of hay bales with pumpkins, take the little ones trick-or-treating and even see some non-spooky fun shows.  There are even Sea World staff members dressed in fun costumes that the kids will enjoy.

Photo props are setup around the entire park so you will enjoy walking around in the fresh fall air.

Then at 6pm Sea World encourages guests with children under the age of 13 to head home.  At 7pm, the bewitching hour, the entire park transforms and the ghoulish characters come out to play.

The scare zones setup around the park are filled with fog and staff members dressed in extremely creepy costumes.  The later in the evening it got, the more girls you heard start to squeal.  As the hours ticked by and the sun went further down – the darker it got – the more intense it became.  There is a minimum of four haunted houses to go through each year with many haunted attractions throughout the park, such as the scare zones and entertaining Halloween shows.

Before the sun goes completely down pull out your camera and snap some photos with your favorite psycho clowns.  The haunted houses are not for the faint of heart and the decorations are amazing.

Our family loves the Christmas holiday.  During November, December and early January Sea World has their entire park filled with holiday lights and Christmas trees.  The main entrance has a tree that has lights dancing to music, which the kids found mesmerizing. We walk around the amusement park drinking hot cocoa and snacking on churros.

Sea World gives their shows a nice Christmas touch which impresses me. With many trips during the spring and summer, it is great to have new entertainment that is filled with the spirit of the season. 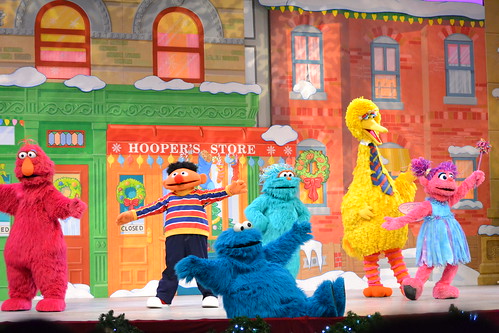 Sesame Street is one of my kids’ favorite shows. They love all the characters and know them by name. Seeing them up close and personal, singing and dancing made their eyes light up. The show even had fake snow drop from the ceiling which really excited the whole crowd. All the little kids ran towards the stage trying to catch the snow. Priceless.

There are a few other holiday season exhibits, such as the Candy Cane Forest and Snowman Village. It was all beyond beautiful to see.

Another great night to visit the park during the winter season is on New Year’s Eve.  The firework show is spectacular, and even with a crowd everyone is able to see the fireworks.

Full Disclosure: I have attended blogger events at Sea World as a Wildside Ambassador where admission was included, however I also take my family at my own traveling expense. Photos shown in this post are from both. We love Sea World and all opinions in this post are 100% mine.

Have you been to Sea World? If so which location did you visit and what is your favorite season or time of year to go?

Dwan Perrin {Life.Family.Joy} is a Dallas/Fort Worth area mom of 5. As an avid traveler she loves to always be on the go. From weekend road-trips to international travels, seeing the whole world is on her Life List. She loves to share snapshots of life on Instagram. You can connect with Dwan on Twitter @DwanPerrin.

Places to See, Food to Eat, Things to Do and Where to Stay.... Oh, The Places We Travel! offers tips on planning your vacation and ways to save. From the best destinations for families to romantic getaways, come travel the world with us. Read More…

Signup to receive updates from Oh, The Places We Travel!

Download our free ebook that is filled with 25 recipes perfect for camping!

As an avid traveler and mom to five, Dwan loves to live life to the fullest.  Whether camping at the local state park, traveling around Europe by train, or relaxing near the crystal waters in Roatan, she enjoys exploring and sharing life experiences with her family. Although she loves to visit her favorite destinations over again, she finds thrills in exploring new places and marking items off her life list.

As a budding photographer, Andrew makes it his mission to document each trip through his lens. His favorite form of travel is aboard a cruise ship, where he can both relax and seek adventure through countless excursions. When he's not behind the camera, a few of his favorite travel hobbies include hiking, fishing, and snorkeling.

Developing a love for travel at a young age, Tapanga's first big vacation was a trip to the Bahamas aboard a Disney cruise at six-years-old.  As a culinary arts student and member of the military, she is eager to taste her way around the world.  Cruising through Greece and taking the train through Italy ignited her interest in international travel.  As an adventure seeker she loves zip-lining through the rainforest in Belize.

This error message is only visible to WordPress admins

Error: API requests are being delayed for this account. New posts will not be retrieved.

Make sure this account has posts available on instagram.com.

Error: admin-ajax.php test was not successful. Some features may not be available.

Please visit this page to troubleshoot.

Travel Tips + Stories to Your Inbox