My family and I  decided to take a trip to Fossil Rim Wildlife Center to tour the 1800 acres and to see most of the 1100 animals that roam freely in the large pastures, putting them in near natural conditions. We picked a cool Saturday morning and arrived at Fossil Rim just after they opened. Make sure you check to see what the hours are because they change throughout the year. When we went they were open from 8:30am to the last car entering at 4:30pm. November – March they close at 3:30pm.

When we entered the park we were greeted by the Addax. My family wanted to ride in the back of our truck while I drove to make it easier to feed the animals. The Addax would come up to the car and take the food from your hand.

The Scimitar-horned Oryx were cool to look at. Their horns curve back in an arc. They also had a unique detail to them.

The Axis deer, as you can see, were different. They can be found in India, Lanka, Nepal and Sikkim. Their antlers are amazing with distinctive markings.

This Fallow Deer had antlers that were shaped like open hands. He didn’t stick around too long. He was a little camera shy.

The Gemsbok were a little ways away from the road when we passed. The males and females have horns that can reach 48 inches long. They are one of the few antelope species that can protect themselves from preditors.

This European Red Deer was huge. Just look at that guy. Noah liked feeding him.

Some babies would also come up to the car so you could feed them. The kids loved feeding them.

Fossil Rim is home to one of the largest Wildebeest captive herds in the world. I didn’t know that both male and female Wildebeest have horns.

Ok, now my family’s favorite, the giraffes. If you have never fed one you have got to take the opportunity to do so. This was so much fun.

Just look at how beautiful these animals are!

Fun Fact: The patterns on a giraffe are unique to each one, just like the fingerprints of a human

Giraffes are known to be in North Eastern Africa, Somalia, and northern Kenya.

Just look at this young giraffe eat from this tree with its long tongue.

This Aoudad was just chilling along the road as we drove by.

Jagger liked feeding this guy. You had to watch out for those antlers, they were huge.

It doesn’t look like it from the picture but these Southern White Rhinos are very big. After the elephant, they are the second largest land animal and can charge at speeds of 35 mph. That’s amazing for something that large and the larger horn can grow up to 5 ft. long.

Watch our video from our family day at Fossil Rim Wildlife Center.

A bag of animal feed is $7.00. You can only purchase one bag of feed per vehicle.

They did offer military and first responder discounts.

I know the prices seem high but it was well worth the adventure. It took our family about 2 hours to go through the park. Fossil Rim also has a cafe called the Overlook Cafe that allowed you to look out over part of the park. The prices seemed normal and not overpriced.

Fossil Rim is located in Glen Rose, Texas which is approximately 59 miles southwest of Fort Worth. An hour and 4-minute drive. 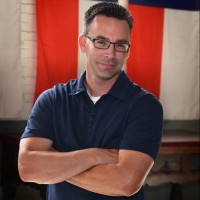 As a budding photographer, Andrew makes it his mission to document each trip through his lens. His favorite form of travel is aboard a cruise ship, where he can both relax and seek adventure through countless excursions.

Previous Post: « Haul-O-Ween at Cars Land
Next Post: How to See All The Sights On Vacation While Staying Energized »

Places to See, Food to Eat, Things to Do and Where to Stay.... Oh, The Places We Travel! offers tips on planning your vacation and ways to save. From the best destinations for families to romantic getaways, come travel the world with us. Read More…

Signup to receive updates from Oh, The Places We Travel!

Download our free ebook that is filled with 25 recipes perfect for camping!

As an avid traveler and mom to five, Dwan loves to live life to the fullest.  Whether camping at the local state park, traveling around Europe by train, or relaxing near the crystal waters in Roatan, she enjoys exploring and sharing life experiences with her family. Although she loves to visit her favorite destinations over again, she finds thrills in exploring new places and marking items off her life list.

As a budding photographer, Andrew makes it his mission to document each trip through his lens. His favorite form of travel is aboard a cruise ship, where he can both relax and seek adventure through countless excursions. When he's not behind the camera, a few of his favorite travel hobbies include hiking, fishing, and snorkeling.

Developing a love for travel at a young age, Tapanga's first big vacation was a trip to the Bahamas aboard a Disney cruise at six-years-old.  As a culinary arts student and member of the military, she is eager to taste her way around the world.  Cruising through Greece and taking the train through Italy ignited her interest in international travel.  As an adventure seeker she loves zip-lining through the rainforest in Belize.

This error message is only visible to WordPress admins

Travel Tips + Stories to Your Inbox